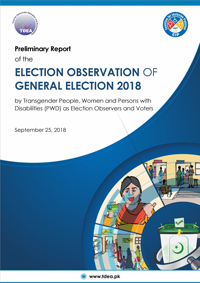 ISLAMABAD, September 25, 2018: Despite progressive legislative and policy measures to facilitate participation of transgender people, women and persons with disabilities (PWDs) in the electoral processes, these individuals faced attitudinal and environmental barriers in the exercise of their right to vote and to observe elections on an equal basis with others during General Elections 2018.

The study suggests that transgender voters found law enforcement officials helpful and were given preferential treatment by polling staff in casting their votes in Islamabad, Lahore and Karachi whereas the incidents of harassment of transgender voters were reported from Peshawar and Quetta. The accreditation cards issued by the Election Commission of Pakistan (ECP) to 25 transgender observers in Karachi were confiscated by the Sindh Home Department citing security reasons. The study shows that transgender observers faced incidents of harassment and were ridiculed on the basis of their identity by general public and the police.

Coalition for Inclusive Pakistan, in collaboration with experts from the Free and Fair Election Network (FAFEN), deployed 15 trained, non-partisan Long-Term Observers (LTOs) to monitor pre-election processes beginning on June 1 and deployed 375 observers on July 25, 2018 to observe the Election Day. The CIP Election Day Observers – who were duly accredited by the ECP and followed international best practice for domestic election observers – consisted of 125 transgender people, 125 women and 125 PWDs.

CIP is a network of 15 civil society organizations working together to promote the rights of transgender people, women and PWDs. The primary purpose of the CIP initiative was to enable representatives of these traditionally excluded groups to observe, analyze and comment on Pakistan’s elections collectively and from their distinct perspectives for the first time in the country’s history.

This report presents CIP’s preliminary findings with regards to the experiences of transgender people, women and PWDs in their role as election observers and as voters. CIP will issue a separate full report of its specialized election-related findings when all observer checklists have been received and analyzed.

CIP’s preliminary findings regarding General Elections 2018 include the following:

Based on the experiences of its observers, CIP offers preliminary recommendations, which are:

CIP is affiliated with the Trust for Democratic Education and Accountability (TDEA), a Pakistani organization based in Islamabad.